As I mulled over the concept of doing a book on Oaxacan textiles, one of the key elements that made me say YES was the vision I saw inside my mind about how I wanted to make the photographs, create the portraits. Indeed, it was clear to me that the project was largely about the images, and that the images would tell the story. Clothing is very much appearance, it is style and fashion, it is adornment and color and texture. A lot of words might convey that…but you know what they say a photo is worth!

It was also clear to me what kind of portraits I wanted to make, and those were, to some degree or another,  the kind of images one sees in glossy magazines or on movie posters. I wanted to photograph the people who dress traditionally in a similar fashion to how we (we being the Westernized Community) photograph our cultural heroes; movie stars, top athletes, beautiful models, musicians, etc.  I think you know what I mean…think of a movie poster, think of the cover of some hip magazine, think of Micheal Jordan in Nike shoes.

Now, for some reason, that’s not done.

Now for some reason, that’s not done. When it comes to us taking pictures of the traditional people of the world, the unspoken rule seems to be that the approach should be documentary style. Examples are National Geographic or gritty black and white type. I have great admiration for on the spot street photography like that and do plenty myself. And I AM doing a documentary project. But, well, for me the people who carry their heritage on their backs, who are the visual icons of their community’s history, THEY are MY cultural heroes. And so I want to portray them the way my Westernized community portrays its cultural heroes, via the photo shoots with models posing, multiple flashes and fancy post production editing. That’s how all those movie posters, shoe ads and magazine covers are created. And they look great, are eye catching and in one way or another, affect the way we perceive and think about things (I wanna be like that guy…)

I’ve decided to break the unspoken rule. Not dramatically, but significantly just the same. I’ve made a decision to approach my subject matter similar to how one might do a  commercial shoot- Ie, you conceptualize the shot, choose the location, pay your model, bring in lighting, have the model pose and work the angles and expressions until you get what you feel is right and then that shot is transferred into the computer “developing room”, aka Photoshop, Lightroom and other great software helpers, and it is rendered into a visually rich image.

That is not what we’d call documentary photography. Yet I’m doing a documentary. So go figure.

However I am making some changes over a classic commercial photo shoot. First, I have very limited choice in who my models can be. There is one requisite, and it is that they must be a person who dresses traditionally on a daily basis. Otherwise, no dice.  Second, I make almost no wardrobe decisions. The point is to take photos of people dressed the way they dress. And finally, I have limited choice over location. It has to be in or near the community the person lives in, and in most cases it has to happen within about 50 feet of where I meet the model. Photo shoots in these communities are not a common event and to have the model traipse around town with me, my camera and tripod and assistant with light stands and umbrellas, it’s a bit too much of a bizarre parade in a small town.

Two main reasons for that.

One is that it will turn heads in my Westernized community. All we’ve really learned how to see are pictures of traditional people through the traditional documentary approach. To see something in a new way is a gift, both to the viewer and the viewed, because it offers a new perspective, and in that new perspective there is the opportunity to catch a glimpse of the broader truth and a drop more of understanding. Both are precious things to all involved.

Two is that it will turn the heads (I hope) of the people I photograph and their extended communities. You see, they watch the same TV as we do, encounter the same kind of magazines or see the same kind of advertising.  Their eyes, like ours, have been trained by the pros up in the marketing department to be attracted to a certain kind of imagery.  All their young boys wanted to be Micheal Jordan in Nikes too, their young girls to dress like the models and actresses they see. In other words, they, like us, want to be like our cultural heroes.  They also understand when the photograph is portraying them as the “marginalized Indian”, as the photographs so often see to do. What if the photo wasn’t doing that? What if instead it was saying “to be who you are, dressed how you do is right on”?

Because a photo can say that. And its true. 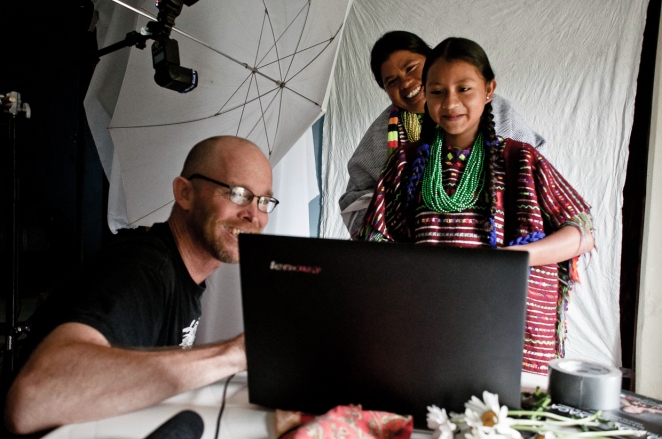